So how many bands do you know of that release an album,
then finally have their first live rehearsal 8 months later?

BLOTTED SCIENCE - 'The Machinations of Dementia' was released
on Sept. 18, 2007, and we finally had our first live rehearsal in
Tampa, FL at Mana Recording Studios on June 1-2, 2008.

Thanks for letting us make noise, Erik!

We documented the rehearsal sessions a bit by setting up a few
video cameras around as Alex’s wifey took a few pics. No, we didn’t
do any studio reEQing, or any of that hi-tech technical stuff, just
got the raw sound from video cameras, and that’s what you get.
Just the three of us playing our tunes.

All photos by Alison Webster (many thanks Aly!)

Alex Webster and I began writing for what would become
BLOTTED SCIENCE in early 2005. I don’t think either of us
really knew exactly what we were trying to accomplish, whether
it would even materialize, or what would happen with the project
down the line. I wanted to be part of a more collaborative effort
(since my last two CDs were pretty much solo efforts), and I
think Alex wanted to branch out and do something a bit different
from his main gig with Cannibal Corpse. In any case, we just kept
writing, ran into delays and difficulties finding the right drummer
before landing Charlie Zeleny (of Behold The Arctopus and Jordan
Rudess), and somehow managed to pull everything together enough
to make a cohesive recording. This was all accomplished through
the magic of the internet and modern recording technology.
Alex recorded in Tampa, Charlie in New York, and I recorded
and mixed everything here in San Antonio. 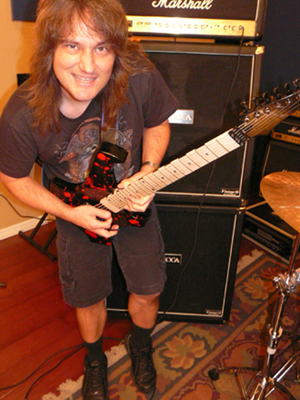